Ayodhya: A new record was created in Ayodhya as six lakh earthen lamps were lit on the Saryu riverbank on the eve of Diwali, days ahead of the Supreme Court verdict on the Ram Janambhoomi-Babri Masjid land dispute.

With the apex court expected to announce its verdict on the Ayodhya land dispute any day now after the completion of hearing on a day-to-day basis, Uttar Pradesh Chief Minister Yogi Adityanath said, “Nothing should be done that violates the dignity of Lord Ram.”

The banks of Saryu in the temple town Ayodhya were lit up with the sparkling light of lakhs of earthen lamps on Saturday evening as people from different walks of life took part in the grand programme and lit ‘diyas’ to cherish the moment.

This year’s count of the earthen lamps lit on the riverbank surpassed the three lakh-plus number of ‘diyas’ lit last year.

Enthusiasm was palpable among the people and the volunteers at dusk, as they lit the lamps to mark the occasion.

Earlier, Uttar Pradesh government’s Director Information Shishir said, “Last year’s record was of three lakh one thousand one hundred eighty six ‘diyaas’ at the ghat. This time, it was 4 lakh 10 thousand ‘diyaas’ lit at the ghat. This was announced by Guinness World Records representative, and is a new record. Apart from this, more than two lakh ‘diyaas’ were lit elsewhere than the ghat. In all, more than 6 lakh ‘diyaas’ were lit.” 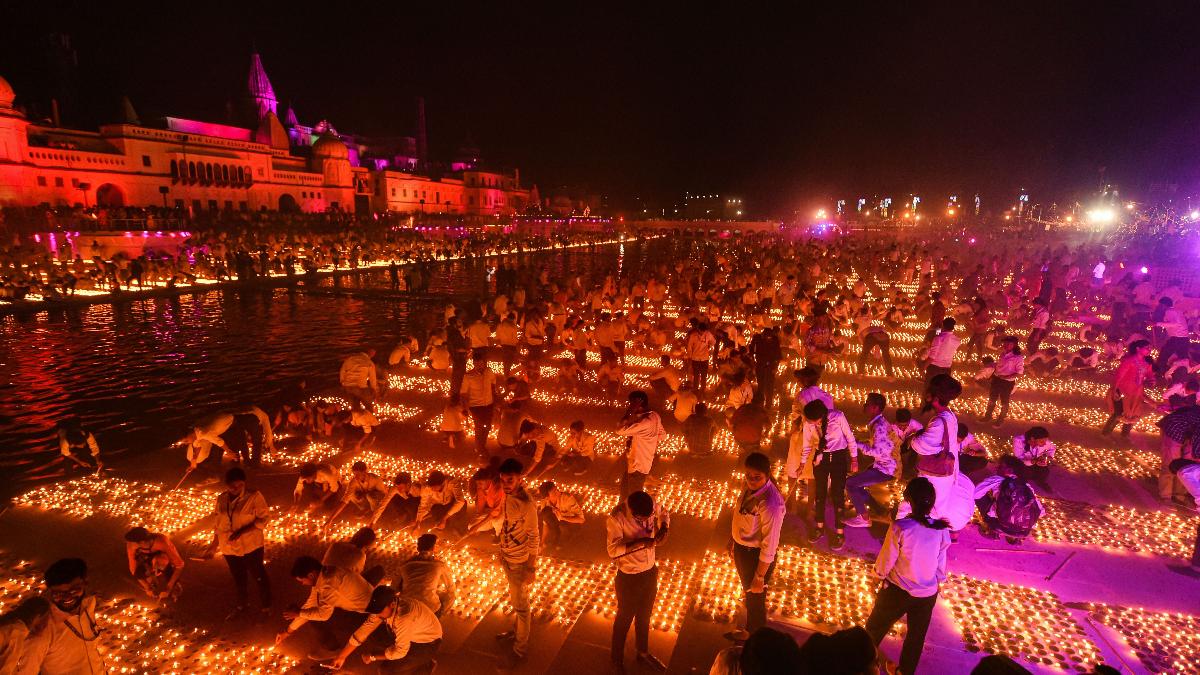 Over four lakh earthen lamps were lit at the ghat of Ram ki Paidhi.

The certificate by Guinness World Records said, “The largest display of oil lamps was achieved by the Department of Tourism, Government of Uttar Pradesh and Dr Ram Manohar Lohiya Awadh University (both India) during Deepotsav 2019 in Ayodhya, Uttar Pradesh, India on 26 October 2019.”

Adityanath, who had earlier declared the ceremony as a state event, personally supervised the arrangements for days.

Addressing the people on the occasion, Adityanath said, “The dignity of Lord Ram prompts us to move ahead towards victory. It motivates us to move ahead and generate a feeling of positivity in the mind and brain. And we will never violate this dignity of Lord Ram. We will devote our entire energy for the development of the state and country after being inspired by the ideals of Lord Ram. We will work so that Ayodhya gets the honour of being Awadhpuri, and also contribute for the development of UP and the country.”

He went on to say, “The previous governments were scared of Ayodhya and never wanted to come here. In my tenure of two-and-a-half years, I visited Ayodhya around 18 times. Whenever, I come, I bring schemes worth hundreds of crores for this place.”

The chief minister on this occasion also inaugurated and laid foundation of various schemes worth Rs 226 crore.

“Of the seven pious cities, three of them Ayodhya, Kashi and Mathura are in our UP. No one in the country or in the entire world possess such prosperous and cultural environment. We all feel proud on the tradition of Ram. The name of Ayodhya itself brings the idea of ‘Ram Rajya’ in our minds,” said Adityanath. “Ram Rajya is such a system of governance, in which people are not differentiated on the basis of caste, creed, religion, sect, region and language. In the past five years, implementation of various schemes of the government has been done with commitment. This is an example of modern Ram Rajya,” the chief minister added.

He said for each follower of ‘Sanatan Dharma’, Ayodhya is the same sacred place, as other religions have their own.

“Deepotsav is the part of continuing efforts being made towards protecting the sacred site and its dignity. Earlier at Ramji’s Paadi, water was dirty and people did not want to take a dip here. Today, water is so fresh here that one wants to take a holy dip. Our attempt is to restore the beauty and dignity of Ayodhya to what it was during Lord Ram’s reign,” he said.

The chief minister said the development plans in Ayodhya are being taken forward with full energy.

“Today every Indian is filled with positivity under the leadership of Prime Minister Narendra Modi. We have adopted the spirit of ‘vasudhaiva kumbakam’ We consider the whole world as one large family,” said the chief minister.

“We have never created problems for anyone, but if someone tries to challenge our self-respect, we know how to teach them a lesson. And we are proud about this. India is re-establishing itself as a global guru and a superpower,” he added.

Governor Anandiben Patel and Union minister Prahlad Singh Patel were also present on this occasion. Governor Patel said, “The festival of Deepawali motivates to fight darkness.” A postal ticket on Deepotsav was also released on this occasion.

Meanwhile, in the morning, a grand ‘shobha yatra’ of Lord Ram was flagged off by Deputy Speaker of Fiji’s Parliament Veena Bhatnagar at Saket College.

Tejashwi draws parallel between government formation in Maha and Bihar

Not sure how captaincy will affect me as a cricketer: De...