Mumbai: Actor Priyanka Chopra and her singer husband Nick Jonas had the best time at the 77th Golden Globe Awards ceremony in Los Angeles on Sunday. They kissed on camera, he swept her off her feet and to round it all off, they presented an important award for the night on stage.

As they made their entry on the red carpet, the couple was caught on the ‘kiss cam’. As interviewers asked them to kiss for their fans, Nick quickly leaned in but Priyanka titled her head back. However, she quickly delivered onlookers from the awkwardness by giving Nick a kiss, even leaving a bright red print of her lipstick on his mouth.

She then tried to wipe it off but that was one mean shade of red. The interviewers interpreted it as Priyanka considering to kiss him or not, being cautious about ‘ruining his lip’. Priyanka blamed her lipstick for the hesitation and said she will ‘patch him up’ backstage.

In another video, Nick and Priyanka are seen having fun with a ‘glambot’. As the superfast camera zoomed past them, Nick took Priyanka in his arms and gave her a sleek dip. The result was too glamourous to behold: 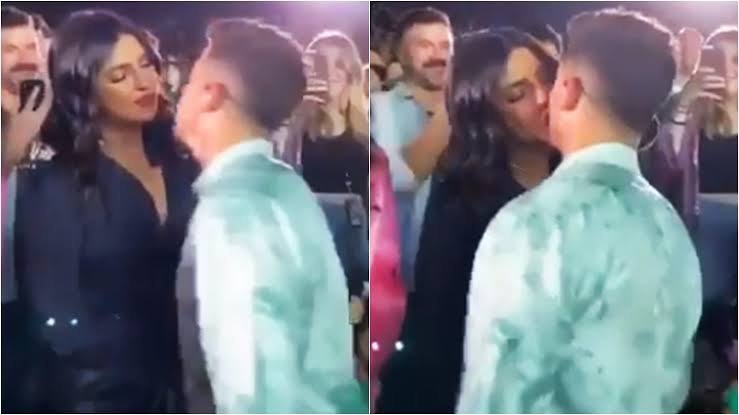 Upon their turn as presenters on stage, the couple arrived in style to present the Best TV Series (Comedy) award. Nick said ‘baby you look amazing’ and that it was nice they did up the house and threw a party. “Yeah, well nice try Nick but this does not count as date night,” she said pointing to the hundreds of guests in front of them. The couple presented the award to Phoebe Waller-Bridge and her team of Fleabag.

Another video from the red carpet shows them talking to television host Ryan Seacrest. He asked the two about their new pup when Priyanka said Nick wanted a dog other Diana. “I don’t think she was enough for him,” Priyanka said. When Ryan asked him if the dogs travel with them, Nick said the Globes did not let them bring the pups to the awards night.

Priyanka and Nick celebrated New Years Day and Christmas together. Nick shared the pictures on Instagram in which the couple and their friends were seen on a picturesque vacation. Nick, seen on his knees, gave Priyanka a kiss on her cheek while she giggled at his action.

The pictures were captioned as, “Grateful for family and friends that make everything better. The friends around us and the ones away from us.. you were missed! I cannot wait to start this new year with all of you in our lives.”

Sonal Chauhan opens up on her relationship rumours with KL Rahul