Home Entertainment Bollywood megastar King Khan awarded Honorary Doctorate of Letters
Share
Facebook
Twitter
Google+
Pinterest
WhatsApp
Mumbai: Move over Hollywood, Bollywood has come to town and its biggest star is in Melbourne. Shah Rukh Khan, 53, is a global icon and a star of more than 80 films including recently voicing the role of Mufasa in the Hindi version of Disney’s remake of the Lion King Movie.
An actor, producer and womens’ advocate, Shah Rukh Khan, is in Melbourne for the Indian Film Festival but today was awarded an Honorary Doctorate of Letters at La Trobe University for his Humanitarian work.
Known universally as SRK across the Indian subcontinent, Khan last graced Melbourne’s shores 12 years ago when he came to the city to film a movie.
The superstar also used his time at the university to announce a four year $200,000 research scholarship for a yet-to-be determined female Indian candidate.
The honour in recognition of his work with women, especially through the Meer Foundation, that focusses on the rehabilitation of acid attack survivors.
But it wasn’t all serious today with the Indian star getting chance to get up-close and personal with some Australian wildlife. 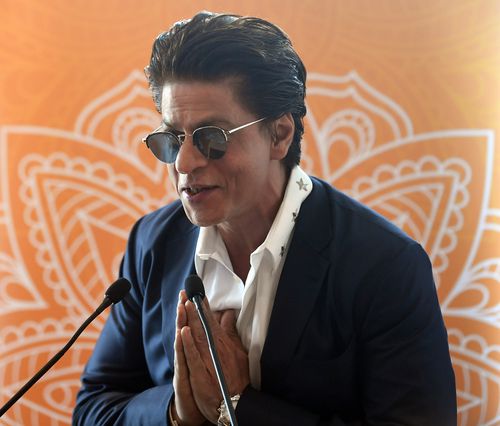 Shah Rukh Khan, who was the guest of honour at the festival was received with great love by the audience. In his trademark charm, he quipped, “Many years ago in 2006-07, I came here when I was a rising superstar giving hit films after hit films. And now I am back here again, still a rising superstar not making as many hit films(chuckles), as much as I would want to do so.”

Further he said, “I thank everyone for the opportunity to speak here. It’s heartening that because of the Indian diaspora – the second generation of Indians here (people like Mitu) Indian cinema is getting noticed. It’s extremely gratifying and makes every Indian proud. I speak for everyone on the Dias today, that we are happy to be here.”

Hopefully Rahul will be PM one day says Deepika Padukone